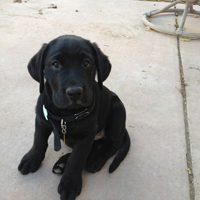 When I found out our next puppy's letter was "G," I was hoping for "Glinda" the good witch. Galaxy is an even better name for my family.

The picture below shows Anna holding Baby Galaxy just after she deboarded the airplane from San Rafael, California.

Like many of other pups, Galaxy has poopy problems. She's on meds for deworming.

Unlike our other pups, Galaxy had a dog babysitter for a few weeks. Because Bonita was in season for her last month with us, Bonita was with us and not at college. (It's rare to have guide dog overlap.)

Galaxy likes to use her vocal chords, and she likes to jump up on things. She's also fond of her teeth. We have our work cut out for us.