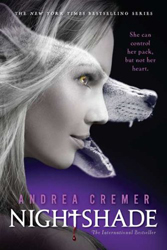 Andrea Cremer wrote a trilogy of werewolf novels featuring a female heroine (Nightshade, Wolfsbane, and Bloodrose). I've read many shape-shifting trilogies featuring female main characters, but this one was a little different.

This book is targeted toward tweens and teens, and the series is actually pretty good. The gist of the series is that once upon a time the magic keepers in the world got in a tiff and split into two groups. One group started into the dark magicks that defied nature, and the other stayed pure.

The dark group created shape shifters and called them Guardians. The Guardians were told they worked for the good guys and didn't know any better, and they protected magic artifacts that the bad guys couldn't use and the good guys wanted.

Enter Calla, a 17-year-old girl who was born a female alpha. She is to marry a male alpha, of the same age, when they turn 18. They'll take over a younger pack and protect an artifact. They get new houses and fancy cars and bunches of rewards for doing so. Sounds good, right? But Calla isn't so sure.

And then this new kid comes to town. His name is Shane and he stands up to the alphas without flinching. And Shane is interested in Calla. You learn all that in the first third of the first book, so I didn't give much away.

But, this is why the series is good, and this is why I'll have my kids read it when they're older (if they can handle werewolf stories). There's a relationship between a girl and a boy where the girl is two years older than the boy. It is portrayed reasonably. A couple of the guys in the pack are gay and together. This is portrayed in a "so what" manner. The bad guys do bad things, and this can open many areas of discussion. A couple of the bad guys are pure evil, but most of them are not. Most of them are shades of gray like everyone else. None of the good guys are saints. The ending might not be considered "happy" for some folk, but it is "correct" for this story.