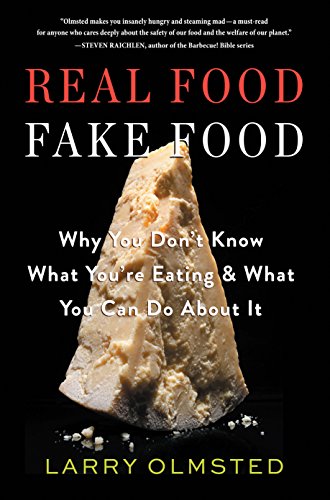 After reading this book, I have two main desires. Firstly, I really want to go to Parma, Italy and have a bite of cheese with Balsamic on it. Secondly, I want more regulations in the United States, at least when it comes to food and the environment.

Olmsted has two big concepts that he talks about for real food. Firstly, some products have a protected designation of origin. If the sparkling wine isn't made in Champagne, France, it isn't champagne. The European Union recognizes that there's a lot of varible sin the making of food, and location can matter.

Olmsted's second big concept is that food is rarely regulated by the government as it should be, so what you find in a bottle of olive oil might not have any olive oil at all in it.

This book solidified my belief that the grocery store is a war zone; it's almost enough to make me try to overcome my black thumb.

Larry Olmsted talks about cheese, vingegar, olvie oil, beef, pork, fish, chicken, wine, maple syrup, and a bunch of other foods. There's a lot in the book, more than a mere book review could give justice to.

Should you read the book? Well,

My husband and I have conversations about books we're reading at any given time. He started reading Real Food Fake Food. After the first chapter, he also wants to go to Parma, Italy.