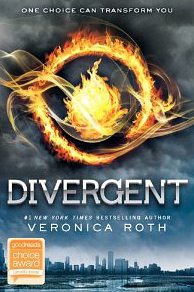 Few stories make me think about them for days after I read them. Even fewer stories make me cry or laugh. This story not only managed to make me think about it for forty-eight hours, but it also evoked more emotion from me than I am used to emoting. (Luckily, no one noticed.) The book is good, and if you're in the mood for a science fiction story with decent character development and a bit of romance that makes you think and emote, read it.

It's a good book to read and discuss with your tween or teen.

The story's premise
The premise of the story is that the United States is gone. The story takes place in one city, and I don't think  it's ever named. It's just "the city." Some people thought the country failed because people were selfish. Others thought it was because people were dishonest, or not friendly, or ignorant, or cowards. The people grouped themselves into factions. The Erudite believe that ignorance caused the fall, whilst the dauntless believe that cowardice caused the downfall.
Each faction lives to the extreme when it comes to the virtue they have put on a pedestal. The Candor strive to never lie. Ever. The abnegation faction is full of public servants that help the faction-less and form the city council, because they don't want power at all. The dauntless patrol the city borders and keep people safe. The Amity faction runs the farms.
Children are born into their factions and are taught to behave as their factions dictate. However, once a year, 16-year olds are given aptitude tests and the next day they must chose a faction. They can stay where they were born or change factions.
The heroine of the story, Beatrice Prior, changes factions. She doesn't do it because she's mad at her parents, but because she has never felt like she belonged in her birth faction.
The story takes place as Beatrice switches factions. Meanwhile, the Erudite want power and have a plan to take the government from the Abnegation faction and destroy the faction.
What might you want to discuss with your kid?
Well, to start off, the kids get five vocabulary words: abnegation, candor, dauntless, amity, and erudite. (Several of those words are on GRE and SAT prep tests, so this is school work!)
The list of discussion topics is long.

All in all, I liked the book so much that I put in a pre-order at Amazon for when the second book is released. I borrowed Divergent from the library.