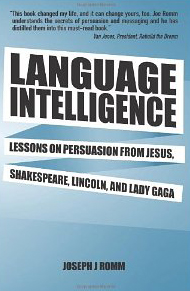 The book talks about rhetoric and politicians. Abraham Lincoln schooled himself in rhetoric. He studied Shakespeare and the Bible, along with actual books on rhetoric. He memorized great speeches and took them apart. Lincoln taught himself to be good at rhetoric, and he was.

Romm's second rule is that you must use repetition to get your point across. In fact, he says about the time your entirely sick of repeating yourself, your audience might have heard you about once. Those three and four syllable words of Lincolns? Those are repeats of each other. Out of the 17 words, there are only 10 base words. The "large" words are continent, liberty, created, dedicated, dedicate, remember, consecrate, unfinished, remaining, devotion, devotion, government, dedicated, proposition, dedicated, altogether, consecrated, and dedicated. None of the words require an extensive vocabulary, and many of them are repeated.

He backs up some of his statements with scientific studies, which is nice.

One of the most important lessons I took from the book was to speak in the positive instead of the negative. One of his examples was to say "I am innocent," instead of "I am not guilty," because people tend to forgot the word "not."